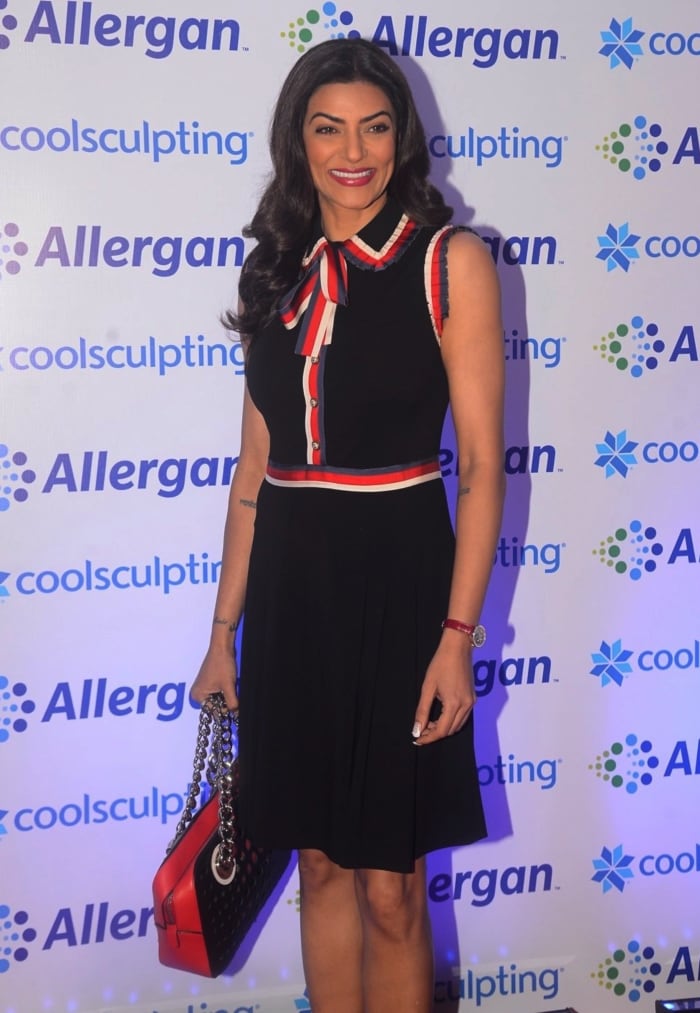 Sushmita Sen has been on our radar lately for many reasons; the foremost one being her fitness game. The svelte celebrity has shown us how agile and strong she is with her turn on the gymnastic rings. She also gave us something to marvel at when she nailed the wheel pose or chakrasana on the 103rd floor of the Skydeck in Chicago. Another time Sushmita recently got our attention was on her United States getaway with her girls which looked like a fabulous time.

Apart from fantastic holidays and impressive exercise spells, it’s been a while since we’ve seen Sushmita on the fashion circuit. Thankfully, she changed that yesterday when she stepped out for a beauty event. Along with the former Miss Universe was an esteemed lineup which included celebrity photography Daboo Ratnani and skin experts like Dr. Jaishree Sharad and Dr. Jamuna Pai.

Although a rare appearance on the style scene, Sushmita made it count with a fabulous look. She wore a sleeveless black Gucci dress with a collared pussybow and piping in the designer’s signature stripes. Sushmita paired this with black cage heels, a burgundy watch and a red and black cutwork handbag.

Paired with the streamlined outfit was a groomed beauty look from the celebrity. Sushmita wore her hair in shiny waves along with defined brows, glossy pink lips and a French manicure.

While we could have done with more muted accessories, we’ve got to say that when Sushmita Sen steps out, she does it in style. Her dress brought together preppy femininity while her crisp, fresh makeup look only further complemented it.

While Gucci is a current rage among Bollywood’s most fashionable, Sushmita’s dress in particular has been seen before. Alia Bhatt wore the same designer dress in bright red for an event last year.

It goes without saying; Sushmita sure knows how to put the ‘Sen’ in sensational.