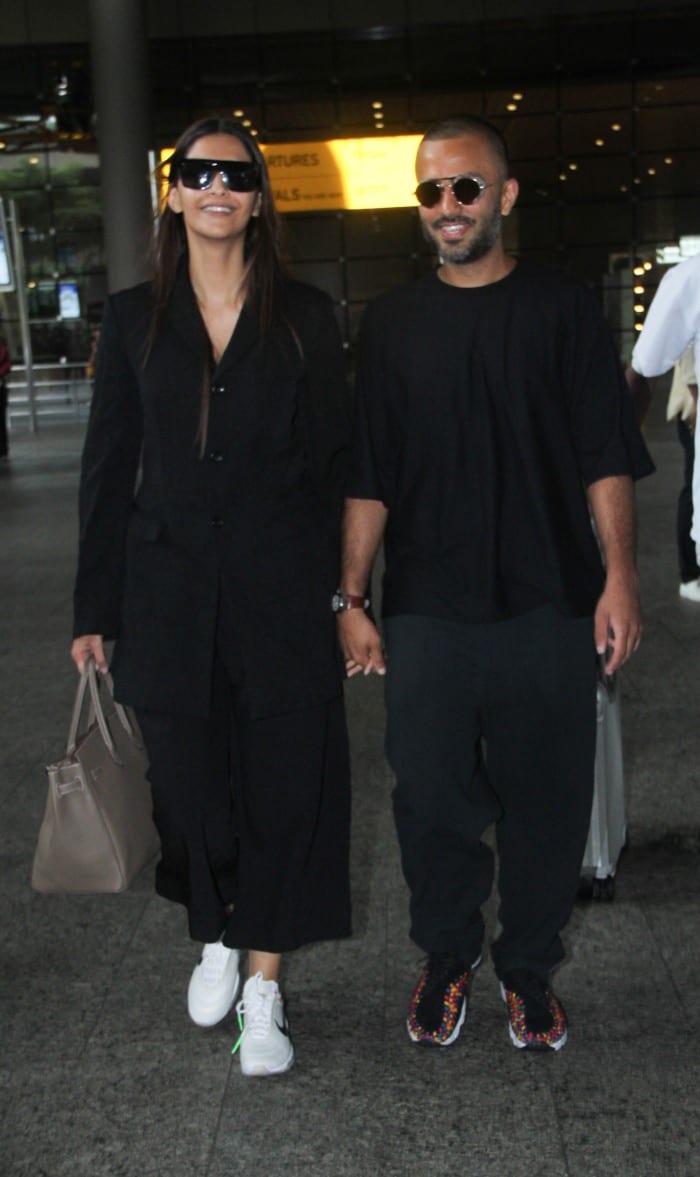 By now, it has been long established that Sonam Kapoor is a fashion icon, not just in India but all over the world too. Her showstopping walks for international designers as well as consistently statement-making Cannes appearances are proof of that. When Sonam married Anand Ahuja this summer, what we didn’t expect to happen was that Kapoor and Ahuja would combine forces to become one of B-town’s most stylish couples. And we aren’t just referring to their glitzy wedding or joint appearance at glamourous parties. It’s happening even at the most inconspicuous of places i.e. the airport.

After a blissful vacation first in London and then in Japan, the newly married couple arrived in Mumbai last night. But it wasn’t any ordinary airport appearance, my friends. This one was different as both, Sonam and Anand decided to match their looks.

Sonam wore a black oversized blazer and wide-legged black culottes, an unusual choice for the airport but a comfy one nevertheless. She pairs this with a designer satchel, white Nike sneakers and large black sunglasses.

To keep completely in sync with his wife, Anand opts for a large black t-shirt and dark grey joggers. He goes for a vibrant pop with colourful sneakers and rounded sunglasses.

It looks like the couple’s sartorial style is rubbing off on each other. Besides donning similar shades, Anand’s oversized silhouette matches his wife’s look, while Sonam’s pairing of sporty sneakers with her look (Anand is the co-founder of India’s first multi-brand sneaker store Veg Non Veg, after all) is a stylish athleisure choice that’s ideal for the airport. Hand-in-hand, the couple strode through the terminals and ensured that they are twinning together and winning the airport fashion game together too. If love looks this good, sign us up please.