Airtel Internet TV, a hybrid set top box, has been launched by the telecom and DTH major in a bid to bring services such as Netflix, YouTube, and games to the TV screen without the need for a smart TV. The new Airtel set top box also supports 4K content and downloadable apps, along with TV channels.

The company claims that it is the first hybrid ‘DTH set top box powered by Android TV’ to launch in the country. Notably, the announcement comes a month after Netflix announced is partnership with DTH providers in India, and the new Airtel Internet TV set top box will come with Netflix preloaded.

There’s also built-in Chromecast support for mirroring content from the phone/tablet screen, and a Bluetooth-based remote that supports Google voice search – which means that you can just talk commands into your remote to browse content on the TV. 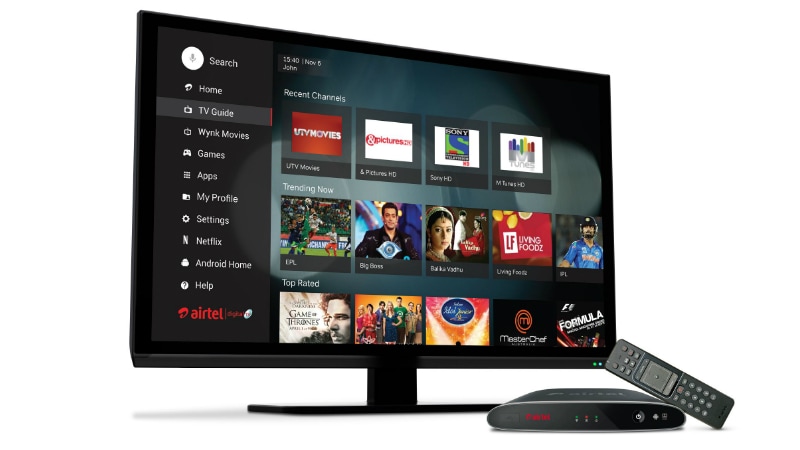 The Airtel Internet TV set top box is 4K content ready, and also enables live TV shows to be paused, recorded or even rewind. Users will need to insert a USB pen drive to record content, and can use an SD card to save downloaded apps. Users can even use the smartphone as a controller while playing games on Internet TV by downloading the GamePad App. There’s an in-built Wi-Fi feature that connects with your home network or even your mobile hotspot if required. Users will also be connect Bluetooth headsets, keyboards, and controllers.

Sunil Taldar, CEO & Director – DTH, Bharti Airtel said in a statement, “Growing broadband penetration is driving the popularity of online content, particularly in urban homes, and with Airtel ‘Internet TV’ we are bringing world-class content from the web and much more to the TV screen. This latest innovation has been designed keeping in mind the needs of Indian homes and it bridges the gap between online and offline worlds to enable an end to end entertainment experience with the convenience of a single device. We will continue to add exciting content platforms to Airtel ‘Internet TV’ and invite customers to experience this innovative offering.”

Also, Airtel has launched few offers for its Broadband customers as well, and they can register under MYHOME on MyAirtel app to get up to 25GB additional data every month with no extra cost – this is meant for those users with broadband Internet plans with rentals above Rs. 999. Those with rentals below 999 will get 10GB additional data a month.

Airtel notes that after a free preview period, all SD channels will be available at Rs. 500 per month. HD channels can be taken through HD MyPack or Customers can get all HD and SD channels at Rs. 700 per month.