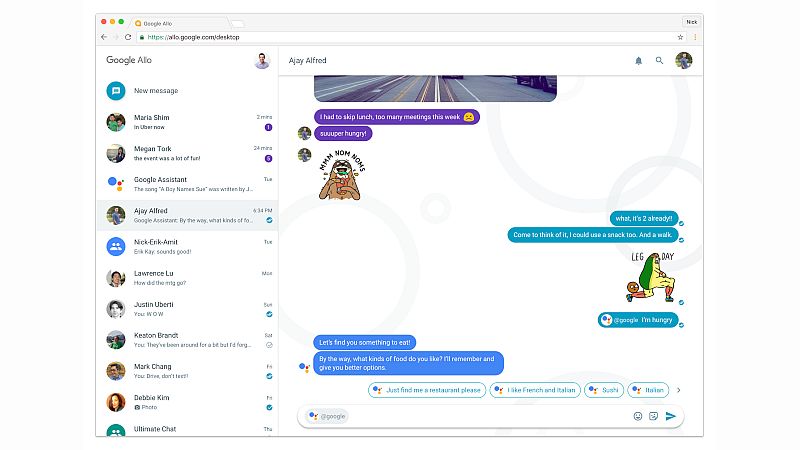 Google’s smart messaging app, Allo, was launched with the company’s machine learning tech and included natural language processing advances from Search. Now, the app is all set to get a Web client, reveals Nick Fox, VP, Communications Products at Google. Additionally, Google has renamed its SMS app for Android, Messenger, as Android Messages. It will be promoted as the messaging app built for Android.

The first sneak peak of the Allo Web client was given away by Fox in a tweet that read, “Still in early development, but coming to a desktop near you.” The screenshot shared by Fox clearly shows that the Allo on the Web will support the same features its mobile app, most notable of those being the Google Assistant bot. Allo’s Smart Replies feature, where it suggests responses to messages, also appears to have been carried over to the Web app for Allo. Also seen are stickers. Unfortunately, Fox doesn’t reveal an exact timeline for the release of the Allo app but he does refer it to be “still in early development.” To recall, Google revealed that the Allo app was first made available in India.

Notably, unlike Hangouts, Google’s Allo app is tied to the user’s phone number – similar to how WhatsApp works. Till now, this meant Allo could only be used on a single device. With the announcement by Fox however, things may change. All this depends on the route Google intends to take to enable Allo for Web. It could take the WhatsApp for Web route, and maintain the single device restriction by syncing messages between the phone and Web client. Or, it could take Hangouts route, removing the single device restriction by tying the service to the user’s Google account and allowing concurrent use across multiple devices and platforms.

Another aspect to keep an eye on would be the method Allo treats chat history. Currently, history is restricted to a single device, and gets erased when switching to a new smartphone. This as you’d expect has been a sticking point for some users, with no method to backup and restore history even on a single device. Google may enable the backup and restore option like WhatsApp, or, go back to the Hangouts route and store history on the cloud for easy syncing with new devices.
Google has been over the years been steadily working on replacing SMS with its Rich Communications Services or RCS initiative. The company is now taking forward the initiative, and has renamed the default Android messaging app from Messenger to Android Messages. The app will be used as the official RCS client by almost 20 OEM partners.

The renaming is official, with Google Play now listing Android Messages. In the changelog, the company says the new version gets bug fixes and stability improvements. The new app also adds simpler sign-up for enhanced features on supported carriers.

Google’s Amir Sarhangi, Head of RCS, told The Verge that the messaging app is getting a revamp to fully support RCS standard. Sarhangi said that the new RCS initiative will ease the wait for an update from manufacturer for the Android Messages app as it can be now downloaded from Google Play. Some of the OEM clients reportedly ready to install new Android Messages app as default messaging app include LG, Motorola, Sony, HTC, ZTE, Micromax, Nokia, Archos, BQ, Cherry Mobile, Condor, Fly, General Mobile, Lanix, LeEco, Lava, Kyocera, MyPhone, QMobile, Symphony and Wiko, along with Pixel and Android One devices. Dieter Bohn of The Verge points out that the list misses out on two major manufacturers: Apple and Samsung. Apart from OEMs, Google is also confirming wireless carriers that will adopt the new RCS standards. The list includes Sprint, Rogers, Telenor, Orange, Deutsche Telekom, Globe, and Vodafone.